The hospital is located in the midst of the savannah in remote south west Madagascar. The nearest larger town is a day's journey away in an off-road vehicle. For several hundreds of thousands of people it is the only surgical clinic they can reach. This is reflected in the large number and seriousness of the cases treated here.

THE ONLY HOSPITAL WITHIN 100 MILES

Hopitaly Zoara first opened 2012 in the remote village of Fotadrevo as a cooperative project funded by Doctors for Madagascar and supported by the charitable Madagascan organization Elson Hanitra Madagascar Mission (EHM). Thanks to the unflagging dedication of Dr. Elson Randrianantenaina and his colleagues, thousands of patients can be treated here year after year. 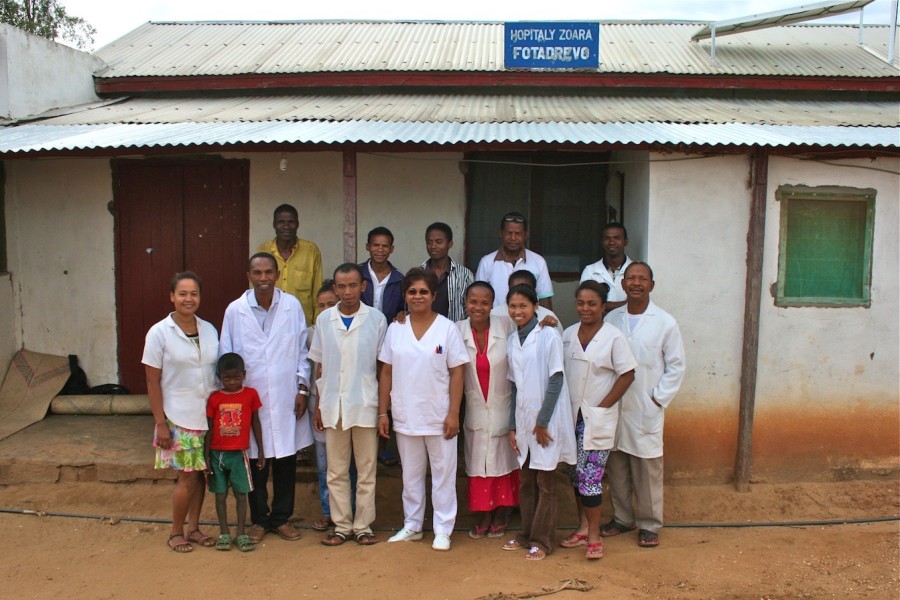 Before the move into the new buildings the team of the Hopitaly Zoara had 2 doctors, 2 midwives and 17 nurses and supporting staff.
TRADITIONAL HEALERS AND THE DIFFICULTY OF TRANSPORT

Many of the patients who arrive here have previously consulted local traditional healers. Not until after the treatment turns out to be ineffective or even harmful, do they set out for Fotadrevo: parents with small children, accident victims with friends and village chiefs complete with entourage. Since for most patients the clinic is far away and getting here is difficult, only the most serious cases are brought here, often at an advanced stage. Childbirth complications, knife, spear, and bullet wounds, infections, tumours and malnutrition are routine in Fotadrevo. Doctors and nurses give their all in emergencies - every procedure must be just right if patients are to have a chance. 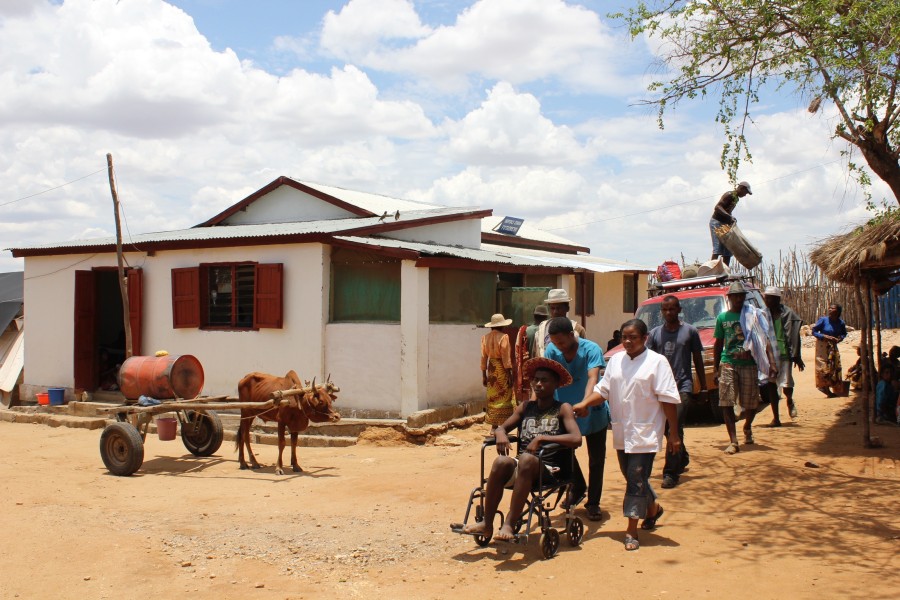 Rapid treatment can make all the difference in cases of serious illness.
FOURTEEN HOUR SHIFTS

Despite difficult conditions, the local doctors do excellent work. A combination of training, experience and thinking on their feet helps them succeed in performing even complicated operations. The sheer distances involved make transfers to other hospitals all but impossible. Dr. Randrianantenaina and his team frequently work fourteen hours a day in order to help as many patients they can. The surgeon and his hospital are highly respected in the region.
As is common in Madagascar, patients in hospitals are provided for by their families: relatives cook, feed and wash their loved ones and keep them company. So not only patients, but also a multitude of others live, eat and sleep on the hospital grounds. 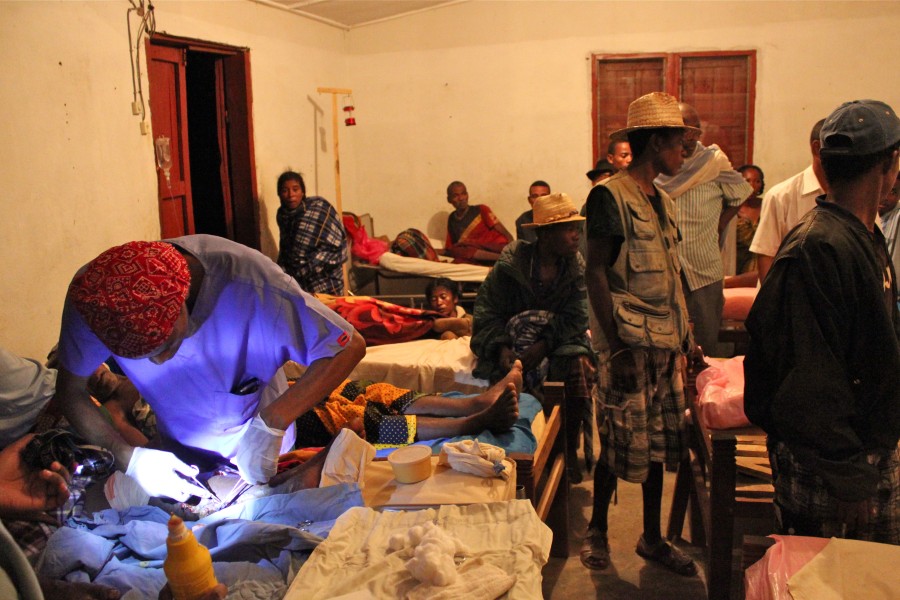 To better care for the numerous patients, we began the construction of new hospital buildings in 2014.
NEW BUILDINGS ARE NEEDED AS THE NUMBER OF PATIENTS GROWS

Word of the quality of treatment and free treatment for destitute patients spread quickly; very soon the small clinic was no longer able to accommodate the flood of patients. The clinic had started up in a rented former rice mill. However, many of the rooms were unsuitable for hospital operation and hygienic conditions left much to be desired. New construction was a must: in 2014 the foundations for a better Hopitaly Zoara were laid. Construction progressed quickly and without interruption, even during the rainy season. The new building was completed along with a new well, biological wastewater treatment and a solar power plant. In November 2015, the opening of the hospital was celebrated together with the villagers and accompanied by Madagascan dances and a banquet. 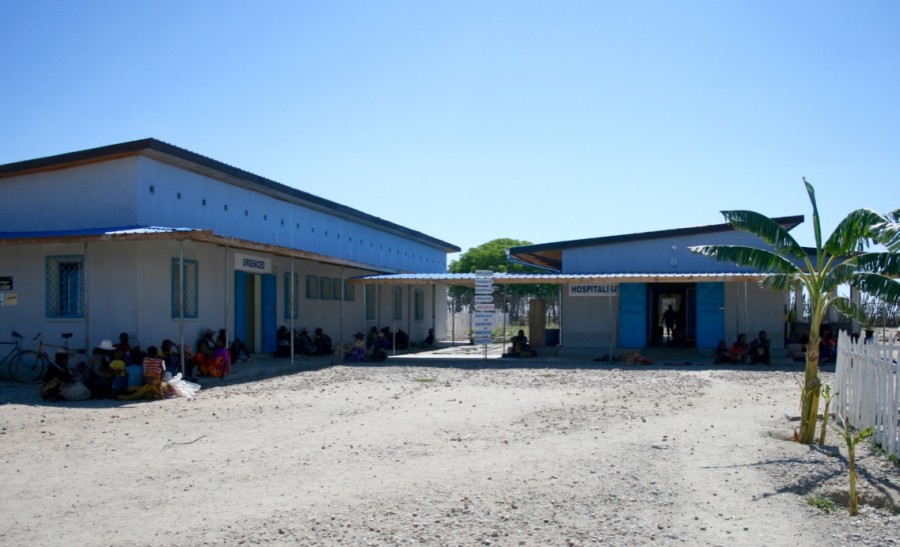 The new buildings include two operating theatres, a laboratory, a delivery room and many other facilities.
Hopitaly Zoara Staff 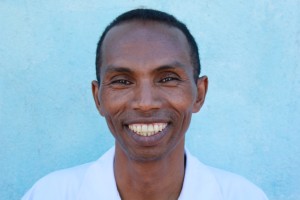 Surgeon and director of the hospital

Dr. Elson Randrianantenaina is a surgeon and director of the hospital Hopitaly Zoara in Fotadrevo. After completing his medical studies and specializing in surgery at the University of Antananarivo, the capital of Madagascar, his first position was with the Institut Pasteur. The extreme poverty in southern Madagascar moved him to give up this secure and well-paid position to work as a surgeon at the southern hospital of Ejeda. A scholarship from an American relief organization enabled him to take part in a five-year continuing education program for outstanding African surgeons. The program took him to Kenya, Nigeria, South Africa and Cameroon; there he learned his specialized surgical techniques from US American surgeons. After first returning to Madagascar and the hospital in Ejeda, Dr. Randrianantenaina founded Hopitaly Zoara - of which he remains the director - in the spring of 2012. In early 2015, he founded another hospital in Sambaina - about two hours south of the capital - of which he is also director. In order to do both hospitals justice, he commutes between the two at regular intervals. 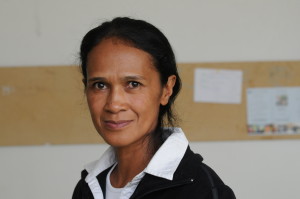 Hanitra Randrianantenaina and her husband met at their church choir. She studied business administration in Antananarivo and gained organisational experience as an accountant for various medical facilities in Madagascar. She accompanied her husband during his training programme on the African continent and worked with him at the hospital in Ejeda. In Fotadrevo she is the chief administrative officer and in charge of logistics. Whenever time allows, she is actively involved in the organization of a series of local development projects: a social aid program for women after surgery, a nutritional programme and a project which finances teachers. The couple have three children who, because of the difficult security situation in southern Madagascar, live 1000 kilometres away in the capital. The couple also privately care for a seriously disabled child whose parents felt unable to do so themselves. 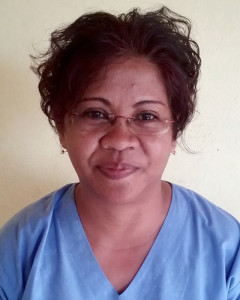 Dr. Sentanirina Andrianarijaona has been the vice-director of the Hopitaly Zoara in Fotadrevo since May 2014. She is an experienced surgeon from Antananarivo specialising in emergency surgery, abdominal surgery, antenatal care and ultrasound diagnostics. She also has experience in treaty leprosy. Even before starting her work in Fotadrevo, she spent several years working with international doctors from France and Italy.

From early on in her career she has felt drawn to working in the poorly developed south of Madagascar. For ten years she ran the Catholic church hospital in Betroka before taking up the position at the Hopitaly Zoara. Because of the great distance, she only manages to travel to Antananarivo about once a year to see her son at university and her two daughters who are in primary school.

From the clinic it's a day trip by jeep to the port city Tulear. During the rainy season the slopes are sometimes impassable for weeks. 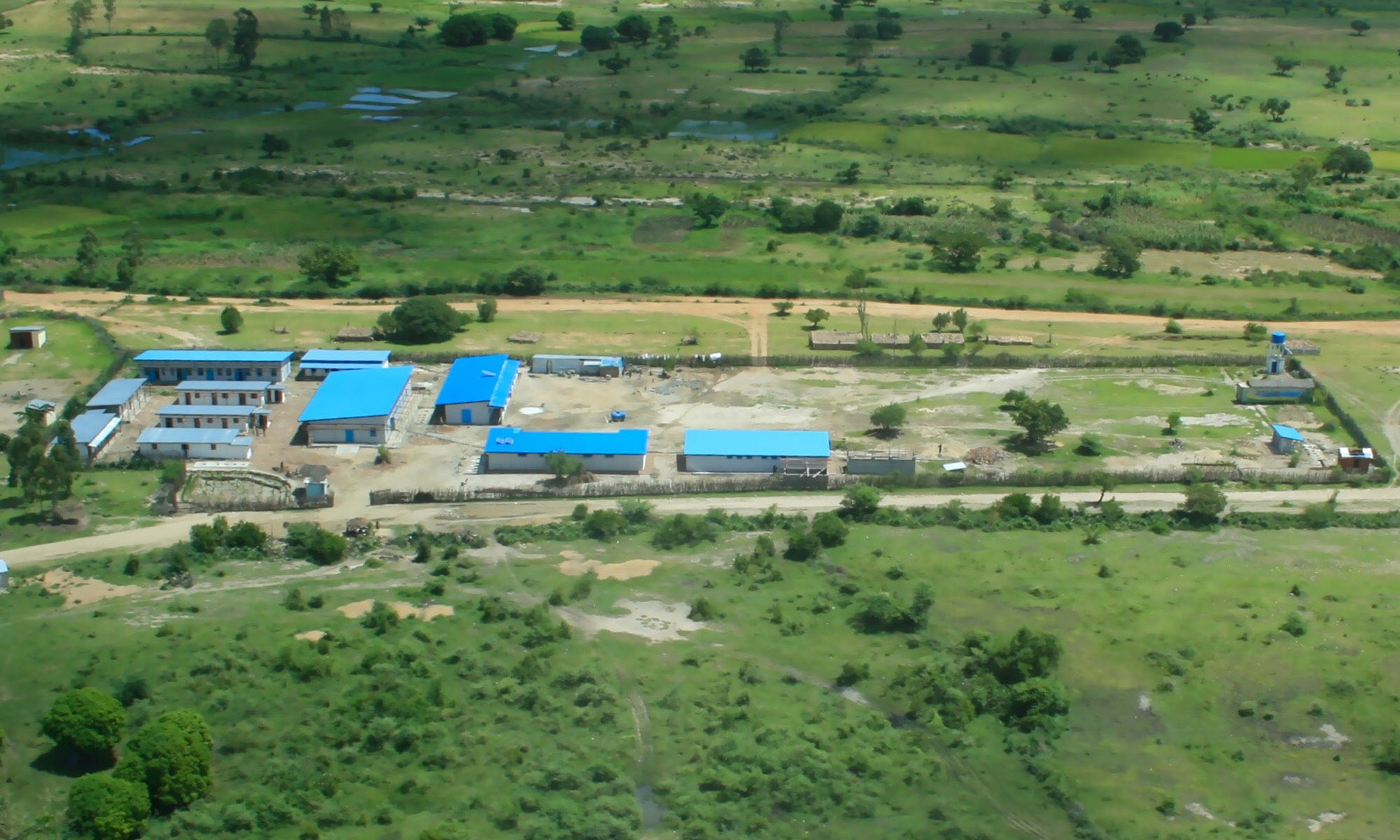